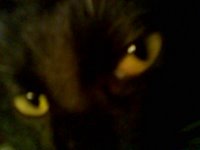 In the good old days, when men were men and women did their laundry, our forefathers ravaged the coasts of England in a quest to improve the general gene pool. Our Danish neighbours apparently had a slightly better idea; avoiding the hard work of raping and pillaging by asking for a ransom not to do so. This was called asking for Dane-geld.

VamPus has been invited to participate in a debate on the freedom of speech by the Oslo Union of Journalists, who tastefully has used a picture of her as a bull's eye in the invitation to all their members (which, I assume, includes most journalists in Oslo). The background is the publishing of the now infamous cartoons of the muslim prophet Muhammad. The vignette of the debate is "Cowardly editors or irresponsible bloggers?" The irony of the name of Rudyard Kipling's poem is hopefully not lost on all. The point is; start excusing one of your democratic rights, and you'll find that "the end of that game is oppression and shame, and the nation that plays it is lost."

I owe this to David Young, who I met at Pokers wedding;

IT IS always a temptation to an armed and agile nation,
To call upon a neighbour and to say:-
"We invaded you last night-we are quite prepared to fight,
Unless you pay us cash to go away."

And that is called asking for Dane-geld,
And the people who ask it explain
That you've only to pay 'em the Dane-geld
And then you'll get rid of the Dane!

It is always a temptation to a rich and lazy nation,
To puff and look important and to say:-
"Though we know we should defeat you, we have not the time to meet you.
We will therefore pay you cash to go away."

And that is called paying the Dane-geld;
But we've proved it again and again,
That if once you have paid him the Dane-geld
You never get rid of the Dane.

It is wrong to put temptation in the path of any nation,
For fear they should succumb and go astray,
So when you are requested to pay up or be molested,
You will find it better policy to say:-

"We never pay any-one Dane-geld,
No matter how trifling the cost;
For the end of that game is oppression and shame,
And the nation that plays it is lost!"

If the choice is to be a coward or "irresponsible" in the defense of freedom, the latter suits me just fine!
Posted by VamPus at 1:24 p.m. 29 kommentarer:

This is the start of something good

Oh, this is the start of something good
Don't you agree?
I haven't felt like this in so many moons
You know what I mean?
- Gavin DeGraw, "Follow through"
Og VamPus kunne ikke vært mer enig!
Posted by VamPus at 3:22 p.m. 5 kommentarer:

"Extremism in the defence of liberty is no vice. Moderation in the pursuit of justice is no virtue."